The new tone for talking about protection 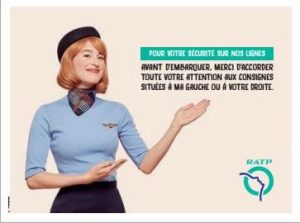 The RATP campaign is using airline code with a touch of humor to raise passenger awareness on dangerous behavior.

By using an offbeat, conniving tone rather than a distressing and alarmist one, RATP (like Melbourne and Los Angeles metros which have launched similar approaches) is betting that its customers will capture the message better.

The NO COM scan